Well I want to begin this review of the Guthrie Theater's misguided production of "HMS Pinafore" by simply stating that I am not, in principal, opposed to updated productions. I have seen many a wonderful opera or play updated or placed in a new time - examples: Sugar Creek Festival's brilliant "L'Elisir" which was updated to the mid-19th century America out west; the Met's "Macbeth," a magnificent "Midsummer Night's Dream" set by the Illinois Shakespeare Festival in New Orleans, "Comedy of Errors" by Chicago Shakespeare set during World War II or even a recently released on DVD production of "As You Like It" set in Japan. What did all of these productions have that was missing from this "Pinafore" - in a word: respect. Watching "Pinafore" last night on PBS one got the distinct impression that the production team just didn't believe in the work of G & S, that they didn't trust it or respect it enough to allow it to stand on its own. It needed fixing - it needed to be updated. This led them down the wrong path I'm afraid. All of the productions named above treated the material with deep respect and love. The Chicago Shakespeare production (directed by Barbara Gaines) was probably the most far afield but yet it was completely faithful to the work and captured the essence of the early Shakespeare play while still bringing a sense of poignancy and regret and hope that was allowed to emerge. It is one of my great sorrows that this production was not filmed for TV - it is perhaps the most magnificent production of anything I have ever seen - but I am digressing.

It might be instructive to compare this "Pinafore" with the Papp "Pirates." G & S purists still have mixed feelings about the Papp "Pirates." (Now, not the movie version - which is really bad - find the video of the stage version). Mostly, I think, because of the re-orchestration. But other than that the dialog is almost 100% complete, the libretti of the songs are only occasionally changed, two songs were added in the 2nd act, but they fit into the plot that Gilbert had devised (for the most part), the songs were only re-orchestrated otherwise they were sung intact - no extra music added, no re-harmonization, no adding silly extra drum beats. In my view the Papp "Pirates" starts with respect for the original work and goes from there. What do we have with this "Pinafore?" The music is completely altered - not just re-orchestrated, but re-harmonized and re-written. New music is added, Sullivan's music is mostly missing for mostof the show except for the faint wisp of his tunes. There are exceptions - the arranger apparently did not know what to do with "Kind Captain" so it was performed pretty much traditionally, as were parts of the 1st act finale and the glee - but then (Like having a 2x4 wacked over the head) suddenly we are jolted into some strange re-arrangement with brilliant choreography that had nothing to do with the show at all - like Act II "He is an Englishman" or "O Joy, O Rapture Unforseen." Then there was the silly sub-plot that the production team created for Dick Deadeye which meant we were subjected to a bunch of confusing extra dialog that made no sense and only diluted Gilbert's wonderful dark character and which culminated in the mind-boggling sequence with Queen Victoria at the close of the show. What did that add? What was the point? Granted the close of "Pinafore" is a little silly and unbelievable - but so is class stratification (that's the point). This subplot added nothing to the show - except time.

Reflections on the performance need to be prefaced with a story - which comes from the memoirs of Rutland Barrington - who was a member of the original D'Oyly Carte company and created roles such as the Captain in "Pinafore," and Poobah in "Mikado." Barrington had a reputation for ad-libbing and being a jokester and would often put extra bits into a performance. Gilbert had expressly banned such bits and silliness - but Barrington could not help himself. (This is paraphrased) Apparently Barrington hit upon a clever bit that was getting some laughs and he begin to do it regularly in each performance (in "Patience" I think, not sure of the show). Eventually word got back to Gilbert, probably from his wife Kitty who would attend performances specifically to look for that kind of thing. Gilbert told Barrington to knock it off. "But, it gets a laugh," protested Barrington. "You would get a laugh if you sat on a pork pie," retorted Gilbert. This is a famous exchange and so when G&S fans talk about pork pies, now you know what they are talking about. Well the point is that Gilbert was not interested in gratuitous laughs and funny bits that had nothing to do with the plot or the characters. For him, the comedy came from the work only if it was played straight and serious.

Watching the Guthrie "Pinafore" last night I thought a lot about pork pies. The show was terribly overacted and mugging for laughs was rampant. Again there seemed to be no trust that the work was funny without adding all kinds of stupid and idiotic bits: boob jokes, pants dropping, pratfalls - gosh one thing after another. None of it was funny. The worst offender was, unfortunately, Captain Corcoran. I am sure this was the way he was directed, but he was over the top in a terribly inappropriate way. Josephine and Buttercup were not quite as bad, but were guilty of being over the top too. Surprisingly Sir Joseph was not. I thought that Sir Joseph and the Dick Deadeye were the strongest members of the cast and were the only two who seemed to have any real respect for the material. Ralph sang out of tune throughout, The Boatswain didn't really exist as his part was cut up and given to several different members of the chorus or just cut. And Hebe was so annoying that she just became another one of this production's silly jokes.

There were a couple moments I want to highlight. There is a history around the character of Hebe which is, in brief, that Gilbert wrote the part with one older actress (Mrs. Howard Paul) in mind but she was eventually replaced by a much younger Jesse Bond. Jesse was a singer and had never been on stage before and was terrified of dialog. Gilbert cut all of Hebe's dialog as a result and left the part with only some singing. (You can read the entire story here: Hebe's Dialog by Marc Shepherd) The Guthrie "Pinafore" restored all of the cut dialog. That was kind of cool actually. I enjoyed the cabin scene with the dialog which is never performed (What, never? Well, hardly ever). While in other places they played fast and loose with the dialog, assuming that we 21st century Americans are so dumb that we wouldn't know the meaning of some of Gilbert's words (like "solecisms" for example) and so the dialog became heavy and stilted, nevertheless at least the two great lines were untouched: "From such a face and form as this..." and "...I am but a living ganglion..." True Dick Deadeye then launched into the silly and confusing subplot which blunted the power of that line and Josephine and Ralph then completely destroyed "Refrain Audacious Tar" by switching the verses around. And Sullivan's magnificent aria for Josephine "The Hours Creep on Apace" was also destroyed by the arranging. The choreography was brilliant and well danced - but irrelevant.  What did the tango sequence have to do with "Things are Seldom What They Seem?" The set designer was actually interviewed during the intermission and made a comment that he had created a ship from the time of G & S.  That is fine - I didn't mind that - the set was actually great.  But, I got the impression that he did not seem to realize that Gilbert had actually based his set design on the HMS Victory and that Gilbert's intention was a masted man-o-war.

I have already mentioned the Queen Victoria nonsense. But I must add that the role was actually played by the incomparable Barbara Bryne. So as idiotic as I found the entire sequence nevertheless the redeeming feature was the enjoyment of being able to see such a wonderful actress at work. Also, just a point of historical note - a midshipman was a junior officer and not a common seaman.

In closing perhaps the most telling moment in the production came right after Queen Victoria's entrance when Sir Joseph's dialog quotes Andrew Lloyd Webber and Tim Rice's "Joseph and the Amazing...." - "Grovel, grovel..." This sums it up for me. This production team really did not want to be doing Gilbert and Sullivan. They displayed no respect for G & S. Rather, they were trying to turn "HMS Pinafore" into an Andrew Lloyd Webber extravaganza - and it was a miserable failure. Maybe the next time PBS chooses to broadcast G & S they will choose a production that is actually a "Great Performance!" 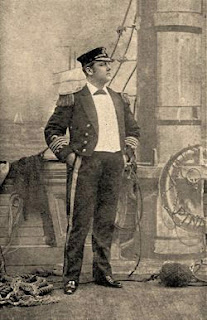 Rutland Barrington as Captain Corcoran - note that mast in the set behind him.
Posted by Pastor S. Blake Duncan at 7:39 AM 2 comments: