The build up to the Met’s new Cosi was pretty much what one might expect. Lot’s of enthusiasm on one hand, and on the other the expected outrage that the Met might actually be attempting something creative instead of resorting to the old tired formulaic approach. Well the reality was an interesting and I think a very successful melding of a rather traditional approach to the story telling with the placing of the story in the context of 1950’s Coney Island. I have certainly seen productions of this opera that went farther afield in the basic production concept (Aix 2017 comes to mind). What was unique here was the integration of the setting and the story in a very colorful and entertaining way. Nothing, in my view detracted from the music (with the possible exception of the business which took place during the overture) and everything worked to bring about a presentation of this opera that was just very entertaining.
There are many dimensions of the original libretto by Lorenzo da Ponte that often get lost. In fact there are so many and the opera is so full of interesting allusions to other literature, biblical stories and historical realities that it is not possible to even pick up on them all. I am constantly learning and seeing more in this libretto all the time. For example, before this production I had a vague awareness that there were allusions to Adam and Eve and the snake (Genesis chapter 3) but the snake handler on stage, especially during Dorabella’s act 2 aria where her text is full of this allusion never struck me as profound as it did in this production. Also, the references to the girl’s emotions being like smoldering volcanos are references to the fact that Vesuvius sits right outside of Naples and is a constant visible presence in this busy seaport town. Naples in fact was an active and busy place and one of the issues these girls from Ferrara struggle with is the fact that life is so much faster paced and busy than they are used to. This busy, unusual setting is a key to understanding the Coney Island setting of this production. Life is different here in this place - people don’t act or look the same. It is both disorienting and it is exhilarating. Within this context it is not then all that much of a surprise that when they are abandoned by their boyfriends these girls don’t recognize the boys who are now pursuing them. One of the most effective scenes for me was the opening of the first act finale where the girls go out for an walk and experience one strange thing after another. In this I feel that the director was completely in tune with the heart of the libretto.
Another popular trope on social media leading up to the production surrounded the casting of Kelli O’Hara as Despina. Here, the claim was that the Met is trying to capitalize on the popularity of one of Broadway’s brightest star. Well, Kelli O’Hara not only sang the role exceptionally well but her embodiment of the character was, in my view, revelatory. She imbued the maid Despina with a humanity, a sadness and a whimsy that I am not sure I have ever experienced from any other performer. It was, perhaps the single most effective performance by a cast member last night. But Christopher Maltman’s philosopher Don Alfonso was not far behind. Again this performance was easily one of the most excellent performances of this role I have ever seen. For the boys and the girls we had excellent young singers: Ben Bliss and Adam Plachetka as the boys and Amanda Majeski and Serena Malfi as the girls. They were in my view wonderful. I particularly loved Amanda Majeski’s vulnerable Fiordiligi and Serena Malfi’s decisive Dorabella. These artists, along with their director, managed to strip away the inevitable sense of victim hood that tends to surround these characters, and also at the same time gave us a sense that they made the decisions they did with purpose and not out of a sense of weak inevitability. This also worked to free the boys of the predator nature which too often surrounds their behavior. What happens on Coney Island stays in Coney Island!
Without giving anything away let me make a couple other observations. The utilization of the side-show workers was highly effective in my view and they helped to create some memorable theatrical experiences: The aforementioned “walk” on the boardwalk, the “Garden of Pleasures,” Mesmer’s machine, the Notary all were highlights. If I had any reservations I have to say that as fun as the bit during the overture was it obscured the music (with the audience cheering) which I found unfortunate. I’m also not so sure I liked the balloon. (# See note below) I won’t say anymore than that.
Lastly, the ending of this opera is always a problem for a variety of reasons and I have seen so many different takes. For me the most effective was in a film of the opera which starred Furuccio Furlanetto as Guglielmo. This production doesn’t really have any new ideas about the ending. And that is ok - most productions don’t.
Overall this was a great night at the Met. I loved this production, this cast and this performance. Don’t miss the HD. 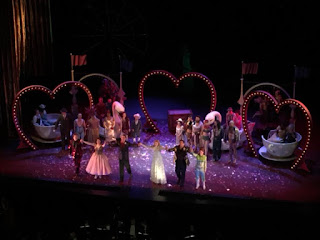 Here is the link for my earlier essay: In Defense of Cosi
# I didn't notice when I saw it in the theater but it was pointed out to me that it is not a balloon.  Fiordiligi is riding the Ferris Wheel!  I don't know how I missed that, it is brilliant and the coordination between the Ferris Wheel in the background and the gondola which contains the singer is terrific!  Watch for it - it is way cool!
Posted by Pastor S. Blake Duncan at 6:45 AM No comments: