Seems to be a bit of a Britten summer - "Billy Budd" (at Des Moines Metro Opera) and now "Albert Herring" at St. Louis' Union Avenue Opera.  Last night I had the opportunity to experience this infrequently performed Britten opera for the first time.  And I really enjoyed this opera and, not only that but it was beautifully performed. The company were simply outstanding in my view. Christine Brewer was terrific as Lady Billows, the very assertive matriarch of the town of Loxford. And tenor David Walton was wonderful as Albert. A beautiful voice and a great actor as the hen-pecked Albert who finally (with a little help from the rum) finds the courage to break the apron strings. But opera requires an excellent ensemble cast and the ensemble was also excellent. Nathaniel Buttram and Holly Janz as the conspirators Sid and Nancy were terrific; David Dillard as the up tight Vicar, Mr. Gedge, who preaches sermons on virtue (maybe I would borrow a title); It was so nice to finally experience tenor Anthony Heinemann in a role that allowed him to open up and really sing, and it was beautiful and his portrayal of the Mayor, Mr. Upfold, was excellent; Bass Mark Freiman as the rather stuffy Constable Budd (How about that two Britten operas and both with a character named Budd!!!); I particularly enjoyed Debra Hillabrand as Florence Pike, Lady Billow's equally uptight housekeeper - she was so funny especially in that first scene; Leann Schuering as the school teacher and finally an outstanding Janara Kellerman as Albert's mother. I have to mention that I loved the kids - Gina Malone, Victoria Botero and Seth Drake (an actual kid actually) played Emmie, Cis and Harry and at times just about stole the show. In general the company acted the opera very well and were very committed.  In this theater one is close enough to see facial expressions and they were often very funny - especially Albert's.

I have at times been a bit critical of the conductor Scott Schoonover, but I have to say he was excellent in this. He paced this work very well and the orchestra was equally outstanding in what sounded to me like a rather challenging score. But the star of the production I think is the stage director Tim Ocel and scenic designer Kyra Bishop. The costumes and lighting were also great. Sorry to gush, but frankly it was a great night at the opera. The piece is profoundly silly though I suspect some of the humor may be lost on an American audience as I get the sense that the plot is profoundly British (echoes of "The Importance of Being Earnest" and many period Britcoms). Even so, it was delightful. The conceit of a young man tied to his mother's apron strings and unable to begin to live his own life is I suspect universal and we certainly have our fair share of judgmental, holier-than-thou types who would like to impose their morality on everyone else. If you are near St. Louis, you should catch this lovely production.

Here are some photos - the set and curtain calls: 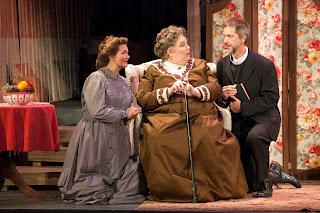 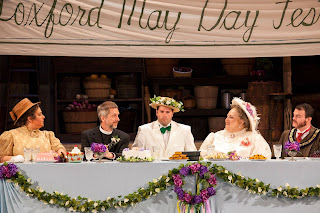 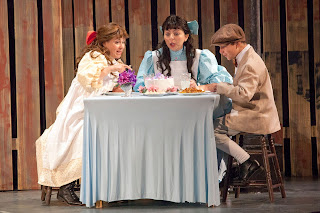 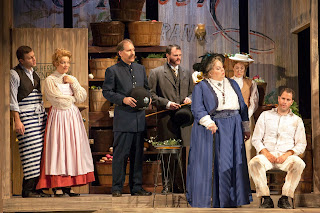