Shakespeare was always a working professional man of the theater in the late 16th and early 17th centuries.  I seriously doubt that he ever gave any consideration to his legacy.  In fact, he seems to have made little effort to maintain any kind of collection of his own plays.  Had it not been for friends and colleagues we would not have some of his most beautiful and treasured plays.  As a working professional he created works often on the fly and frequently worked alongside of other writers to complete works, especially as he got older.  One of his close collaborators was John Fletcher with whom he co-authored “Henry VIII,” “Two Noble Kinsmen” and “Cardenio,” the lost play.

The history of “Cardenio” is really quite interesting.  The story is taken, more or less, from the first part of Don Quixote by Cervantes. Fletcher and Shakespeare, it is assumed, re-worked the story and created this play.  It was lost probably to fire, but seems to have mostly survived in a work entitled “The Double Falsehood” by Lewis Theobald.  There are a lot of ins and outs to this story, but the Royal Shakespeare Company’s Gregory Doran with his own group of collaborators took the Theobald play and re-worked it, adding a couple scenes in order to fill out the plot.  This play they present then as “Cardenio” the re-imagined lost play of Shakespeare and Fletcher.

It is this work by Fletcher/Shakespeare/Theobald and Doran (and others) that was presented by St. Louis Shakespeare.  It is a very interesting work, especially if you know your Shakespeare. I have to say that in reading an interview with Doran he acknowledges that he felt the play sounded more like Fletcher’s work than Shakespeare’s and I have to concur.  The use of the language is not as colorful and evocative as is mature Shakespeare.  This work is also one of the last plays Shakespeare himself is supposed to have worked on and I think it is most probable that most of the work is Fletcher with Shakespeare serving as mentor/editor.  For me, the dialog just didn’t sound like Shakespeare.  However there were moments that did feel like the master.  Consider this: by this time in his career Shakespeare had mastered the ability to evoke deep emotion, and he himself seems to have been dealing with his own personal grief, loss and a sense of deep guilt over his virtual abandonment of his family for all those years.  This I think is reflected beautifully in both the final scenes of “Winter’s Tale” and “The Tempest” but I caught glimpses of it here in the speeches by Dorotea and also in some of the sections that included Luscinda’s father Don Bernardo.  Those scenes were heart wrenching and I could hear Shakespeare himself expressing his own guilt and regret for his neglect and selfishness as Colin Nichols expressed these words as Don Bernardo.  He was easily my favorite character, and perhaps because the character and I are both about the same age, I could really relate to him.  Colin Nichols  did a beautiful job with this role.  The abused, actually raped Dorotea was also movingly portrayed by Lexie Baker.  She was able to bring us all into her grief at her horrible betrayal.

One thing I found curious about the play was that there was a parade of references to other plays in the canon.  Certainly Dorotea’s plight and her subsequent escape from her father’s house and the dressing as a boy reminded me of “As You Like It.”  Rosalind’s situation is less heart-rending, and she is an aristocrat where Dorotea is a peasant who, it is clear, has little to no recourse.  Gregory Doran added the abduction scene that felt like he took right out of “Cymbeline,” and of course, despite the fact that Cardenio’s taking up the garb of Tom O’Bedlam is directly from Cervantes, one can’t help but notice the strong similarity between Cardenio and Edgar in “King Lear.”  This is another reason I felt that the play was more Fletcher than Shakespeare.  The master I feel would not be so obvious with these devices that he used to such brilliant effect in earlier plays.  But for Fletcher, they are devices that worked so why not include them.

I am thankful that I live in the St. Louis area where we have such excellent and outstanding theater and opera companies.  St. Louis Shakespeare was founded by Donna Northcott and is dedicated to Shakespeare and classical plays.  They have performed the entire canon – no mean feat!  Bravo to them!  I have enjoyed a few of their performances in the past including a well done, albeit long evening of Henry VI.  This production of “Cardenio” is really well done on a variety of levels.  First, that the company would find and be able to adapt this “lost” play is worth celebrating.  The performance of this play gives others and me the opportunity to deepen our experience of Shakespeare. So, Brava to Donna Northcott for doing whatever needed to be done to secure the scripts and the rights to do this work in St. Louis.  I was actually shocked that opening night was not sold out.  It should be!  All of St. Louis should be packing this theater for this play.

The sets were very well done.  Functional set pieces that could be easily moved into position worked very well.  I think they might have cut the falling leaves.  But the use of a simple set piece here and there was all that was needed to evoke the location of the scene.  The acting was very good.  All of the principals embodied their roles and drew me into the story.  I have already mentioned two members of the cast whose work struck me as particularly outstanding.  I also want to commend Jason J. Little on his portrayal of the Don Giovanni-like Don Fernando. (That is, by the way, Tirso de Molina’s Don Juan Tenorio and not Da Ponte, I actually found a number of resonances with the Molina in this play and think it is possible that Fletcher might have been familiar with it).   Little’s Don Fernando was suave, seductive and innocent but capable of becoming horribly ruthless and violent when crossed.  Erik Kuhn played the betrayed Cardenio effectively.  His naïve trust in his aristocratic superior Don Fernando leads to him to set himself up for a terrible fall. Kuhn was effective in giving his blind and undeserved trust and was beautifully convincing as the lover in his scenes with Luscinda.  Shannon Lampkin was also deeply moving in her portrayal of a young woman who simply has no options and to whom no one will listen.  Overruled and having her feelings insensitively rejected by her father, her Cardenio is the only one whom she can reach out to but she is locked away from him.  Her Isabella (Measure for Measure) like refuge into a convent was convincing as an act of desperation. Fernando’s brother Pedro was portrayed by Kevin O’Brian who was excellent making us think in one moment that he is the good guy and then in the next frustrating that impression with the realization that he is also rather selfish and myopic.  Despite his sense of right and wrong pushing him, he seems to run up against this brick wall of his aristocratic privilege.  The remainder of the cast was excellent, I have to mention Shane Signorino whose odious Master of the Flock made that brief scene one of the most riveting in the performance.

If I have one complaint it is this: throughout the evening the music used was mostly taken from the album Los Ministriles: Spanish Renaissance Wind Music. This is an older album by the Philadelphia based early music band Piffaro.  I feel that since so much of the music was taken from this album that they should have been acknowledged in the program.  If it had been only one or two cuts then fine, but it seems to me that over half of the album was played during the production and consequently Piffaro deserved a shout out!

Finally – SPOILER ALERT – I have to conclude with a little reflection on the ending of this play.  The denouement is well, oh so Elizabethan/Jacobean but not necessarily Shakespearean.  And this is another yet clue to Fletcher’s dominance in the writing of the play.  Even in the problem play “Measure for Measure” Shakespeare doesn’t really tie up all of the loose ends in such a forced manner.  Isabella’s silence speaks volumes after the long final scene during which the entire play unravels and Duke Vincencio is seen to be the complete creep he is.  The final scene of this play, “Cardenio,” was similar to “Measure for Measure” in that all of the plot lines were unraveled and tied up in this long final scene.  And, Duke Vincencio like, Don Pedro manages to string it out one painful secret at a time.  When we reach the end and Don Fernando is chastened and agrees (tacitly) to behave like a good aristocrat from now on and everyone lives happily ever after, it is just is rather completely unsatisfying.  And I don’t think it will really cut it for a modern audience.  After all Dorotea was raped! Whether or not she was in love with her rapist is irrelevant – he wooed her with lies and manipulation and then dumped her when he got what he wanted.  Luscinda fought off her rapist on multiple occasions and even was abducted by him as her father further essentially sold her off to the highest bidder. Even Cardenio experienced moments of mistrust of her. That this is a typical Elizabethan ending (though not all that typical of Shakespeare himself) is worthy of comment.  The fact is that even today with more modern works we audience members like to nurse the fantasy of “happily ever after.”  There is none here.  This is a male world of dominance and abuse of women where the men in power – whether they are an aristocratic son, a father or even the Master of the Sheep – can sexually abuse the women they encounter with impunity.  Maybe we still live in this world – but this world is coming to an end.  Despite powerful leaders who brag about women who “will (supposedly) let you do it” and other powerful men who use their power to dominate and objectify women this world is coming to an end and the sooner the better.  This “lost” play mostly by John Fletcher reminds us that there is work to do here. And that this kind of male behavior towards women, while certainly old historically, is still as odious today as it was then in that it ruins lives and destroys relationships.

Bravi to the company for performing this play and for their excellent production.  And good luck with all remaining performances. 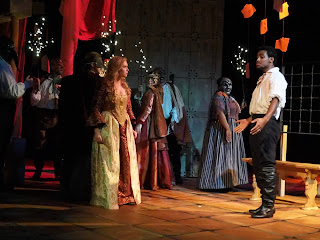 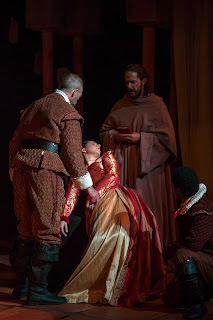 Chicago Shakespeare – Taming of the Shrew